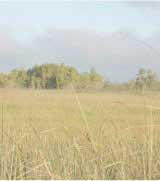 The EDEN domain was broken into equal-sized rectangles ("cells") that in total are referred to as the "grid". The Universal Transverse Mercator (UTM) projection, using the North American Datum of 1983 (NAD 83) was selected as the EDEN grid map projection and coordinate system. To match the Airborne Height Finder (AHF) system of sampling spacing, the spatial resolution or the dimensions (in ground distance) of each grid cell is 400 m on a side. The AHF is the helicopter-based high accuracy elevation data (HAED) measuring system that has been used in the past to collect Everglades ground surface elevations.

The GIS and metadata files have been revised to include the expanded EDEN domain that includes the northwestern portion of ENP and the southern portion of BCNP.