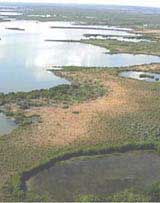 Ground elevation data for the greater Everglades and the digital ground elevation models (DEM) derived from them form the foundation for all EDEN water depth and associated ecological/hydrologic modeling.

This DEM was produced using the version HAED_v01 of the HAED, all available aerial height finder (AHF) data points posted to the SOFIA website as of October 2007. To create a realistic region-wide elevation model for EDEN purposes, the elevation data were segregated by Water Conservation Areas and National Park boundaries so that local trends could be isolated, sub-region specific interpolation models could be developed, and realistic breaks in elevation along sub-region boundaries could be imbedded in a final, region-wide DEM.

The ground elevation, and therefore water depth, in the Everglades can vary by centimeters or tens of centimeters within a few meters of a given location as a result of microtopographic features. In addition, ground surface elevations in the peat soils of the Everglades can drop during droughts due to compaction as the peat dries and can rise again in the wet season with re-hydration. The elevation value for each EDEN 400m by 400m grid cell is a modeled value influenced by variation in the AHF data surrounding the grid cell. Users are cautioned to use the EDEN data appropriately for site-specific assessments.

What has changed between the January 2010 and October 2011 Versions?