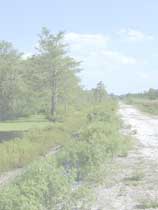 The daily water-level percentile for a specified month is defined as the daily water level at a location that has not been exceeded by a specified percentage of the days occurring during that month of the year and over the period of interest. Computations of the daily water-level percentiles for a given month are based on the daily median water-levels at a location (gage or tree island) for all the days of that month during the IOP period. These data are ranked by water level, and then a non-exceedence probability is computed for each daily value using a plotting position formula (Helsel and Hirsch, 1995). The value for specific percentiles (10th, 25th, 50th, 75th, and 90th) is determined by interpolation between the computed values and then plotted. Colors are used to separate above average (blue, greater than 75th percentile), average (green, between 25th and 75th percentile), and below average (brown, less than 25th percentile) conditions.

The maximum and minimum daily water levels for each month during the IOP are also shown on the daily water-level percentiles plot for each gage, and are the highest and lowest, respectively, daily water levels at that gage for that month during the IOP period. The average ground elevation at the gage is plotted, and, during the dry season, water levels at some gages fall below the land surface. The reliability of the data under these dry season conditions varies based on the gage construction and the site conditions that control the hydraulic connection between surface water and groundwater in the vicinity of the gage. Some gages have stilling wells that record water levels up to two or more feet below land surface while other gages may be wells only a fraction of a foot deep. Unfortunately, information does not exist to determine with certainty the accuracy of the data in these circumstances. Therefore any gage data recorded below the land surface is of unknown quality and is considered poor. Several of the water-level gages in the EDEN network are shallow groundwater gages, and the confidence of these data is not reduced to poor when water levels fall below land surface.

Using the daily water-level surface generated by the EDEN surface-water model, the current water level at each tree island is estimated for its cell location. These water levels are plotted on the daily water-level percentile plots after a 4-day delay to allow the data-collection agencies to quality assure the provisional real-time data at gages used for input to the model.